Planet Mars is considered the next place where humanity will set foot in the universe, up to the point that systems that solve problems of habitability are being hypothesised. Among them is Nüwa, a futuristic martian city designed by ABIBOO architecture firm in cooperation with researchers from SONet. Nüwa is built in the rock, vertically. It features modular buildings that include both residential and business units, linked by a network of tunnels protected from the radiation of meteors and with indirect access to solar radiation. This new settlement would rely on the earth only during an initial phase, then it would become independent and sustainable. It could host 250,000 people.

The main problems regarding its creation would be solar radiations, the extraction of resources from the soil, production of food and water and the creation of an artificial environment that would simulate the environmental conditions on the earth.

Mars is too small to retain the inner warmth necessary to produce a planetary magnetic field. Its feeble gravity is not able to generate a dense atmosphere, which is a few hundredth lower than that on the earth. Moreover, this planet is also subject to continuous cosmic radiations coming from the sun or the interstellar space surrounding it. According to a research developed in 2014, it was determined that in the best case scenario a six-month journey and a year-long permanence on Mars would expose its inhabitants to an amount of radiations that surpasses twenty times the maximum exposition to radiations allowed by law to those who work in the nuclear industry, thus exposing people to a higher risk of contracting certain illnesses such as cancer. In order to be protected by radiations, it is necessary to hypothesise an underground life on Mars and to exploit suitable shielding materials such as polyethylene and others that contain boron and nitrogen. Also water could be used. However, water vapour in the atmosphere is very limited, and on the surface of Mars liquid water cannot exist. There is a good ice reserve in the polar regions and under the surface, where ice is mixed to the soil in a sort of permafrost. Moreover, ice can also be found in certain regions that are extremely cold, because they are never touched by the sun. Water is also needed for the production of fuels and it can be extracted from the existing environment on the planet.

As far as food is concerned, the situation is even more complicated. The average temperature on Mars is 63 degrees Celsius below zero, and the night-day temperature range is high. Temperature, then, will need to be artificially regulated. Animal farms cannot be taken into consideration, because their management requires too much water, energy and food. Only vegetable crops can be taken into consideration. The most suitable varieties would be microalgae, because of their efficiency in terms of space and use of resources, and also because they contribute to the revitalisation of the atmosphere and to the management of water. The other most suitable vegetables for the Martian environment would be asparagus, spinach, tomatoes, mushrooms, cabbage, garlic and carrots. Direct cultivation in the soil is not easy because of radiations, gravity and solar radiations. Pressurised greenhouses would have to be devised, but they would require a lot of energy to function. A more practical solution could be hydroponic cultivation or, even better, underground aeroponic cultivations, where water and nutrients reach plants in the form of fog. The cultivation of plants can benefit the production of oxygen and contrast carbon dioxide, which constitutes 96% of the atmosphere in Mars. For this reason, tools such as the Mars Oxygen Experiment are being tested. Mars Oxygen Experiment extracts oxygen from carbon dioxide through the electrochemical separation of carbon dioxide molecules into carbon monoxide and oxygen. The Nüwa project highlights the necessity of building scientific bases or human settlements on other, highly inhospitable, planets. 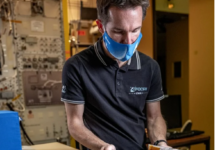